From the bpas archive: The Abortion Law pioneers

Nearly half a century after the Abortion Act, the battle for women’s autonomy over their own bodies continues.

Over the last few years, there have been numerous attempts at restricting women’s access to abortion care. From legislation in the House of Commons to placards outside our clinics, we have seen a significant upsurge in anti-choice attempts to erode women’s hard fought for rights.

This is why we felt it was important that we open up the bpas archive, and look again at the work of campaigners so vital to the foundation of abortion rights in this country. These campaigners from the 1960s are of course inspirational, and we can also learn from the ways the debates around abortion and women’s reproductive choices has shifted – and in some ways stayed painfully static – over the last 46 years.

Our first post from the bpas archive is by Diane Munday, an abortion rights activist and former general secretary and vice-chair of the Abortion Law Reform Association, who very kindly donated material to bpas and The Wellcome Trust which enabled this archive project to take place. Diane wrote this piece 40 years after the Act was passed, reflecting on why she became involved in the movement, along with extracts from a 1967 ALRA leaflet:

I once knew a woman who had a backstreet abortion and died: a married woman, already the mother of three young children, who just could not afford another child. I was absolutely shocked. It was the first time I had come across abortion. I was in my early twenties, working at St Bartholomew’s Hospital doing research, and I mentioned it to a group of doctors one lunch time. They looked at me in amazement, and said words to the effect: ‘Well, where have you been all your life? Stay behind on Friday.’ I discovered that Bart’s and all the other London hospitals put wards aside every Friday and Saturday night for women who were brought in as a result of backstreet abortions – Friday being pay day. Bleeding, septic, sometimes dying. This was accepted everywhere.

I put it to the back of my mind. Then, during my third pregnancy, I was very uncomfortable and not sleeping well – I am a diabetic and I had very large babies. My doctor gave me a prescription for Thalidomide (a drug found to cause disability), which I never took, and I was so thankful that my son was born perfectly alright. I was aware of a number of people in the area who had badly handicapped children. I saw a letter in the Observer, talking about the Abortion Law Reform Association (ALRA). I wrote and joined because, having thought about it deeply probably for the first time, I came to the view that if I had taken that drug, and had developed a handicapped fetus, I would have wanted an abortion.

Initially I was a fairly inactive member of ALRA – and then I became pregnant again for the fourth time in four years. I just knew that there was no way I could cope with a fourth child at that time. I was married, we had a reasonable income, but it was an instinctive drive telling me our family was complete. Nothing, nobody could have made me have that child. For the first time, I recognised the feeling, the strength of the drive that forced women, like the one who had died previously, to damage themselves, to take the risks they took to end a pregnancy. We all have our limits. For some it can be after one child, for others it can be before they have any children, and for some it can be after 10 children. It is an individual drive and so must be an individual choice.

I was fortunate. After a lot of asking around, a lot of heartache, I bought my abortion in Harley Street. The first NHS consultant I asked about an abortion treated me like dirt: ‘My wife’s got four children and she manages perfectly well, what’s the matter with you?’ Then a wet-behind-the-ears trainee psychiatrist informed me that my problem was in my relationship, that my whole life was a mess, and I should have this child and go up to London for psychiatric treatment three times a week. As far as I could see the only major problem in my life was that fourth pregnancy and to suggest I should travel 60 miles a time, three days a week with four underschool-age children just showed he didn’t know what real life was about.

A woman I had met on holiday gave me the number of a Harley Street doctor who her neighbour had been to. I was utterly terrified when I went in to see him. He said, ‘You look terrible, would you like a drink?’ and got out a bottle of gin. Everything I had ever read about backstreet abortionists flooded back to me! However, he was an extremely highly qualified man. Years later, when I persuaded him to give some money to ALRA, I asked him how he had got into doing abortions. He told me that, when he was a young doctor, a woman had asked him for an abortion and he had sent her away, told her to have the baby and that she would grow to love it. She hanged herself that same night, and he said he felt he had killed her as surely as if he had put a gun to her head.

He sent me to see a psychiatrist, for 10 guineas to get a certificate – this was 1961 – to show that I was so mentally disturbed I could not cope with another child. The gynaecologist then told me that he had booked me into a nursing home the next week and it would be £150. We could not raise £150 – that was the equivalent of over £1000 today. So in my naiveté I asked him, ‘Could I take sandwiches in and I don’t mind sharing rooms?’ He came back and asked if £90 would be alright. It absolutely broke us. But I had my abortion. I was alive and well and without the pregnancy that I could not contemplate, and I knew other women in similar situations were dying.

When I came round from the anaesthetic, I could not thank God because I don’t believe in God, so I made a very muddled vow to myself. I woke up thinking of the woman who died and others who would die and that it was because I had a cheque book to wave in Harley Street that I was alive. At that point I thought, ‘I am going to get involved in this, I am going to do what I can for women who don’t have cheque books so that they too can have what I saw then and still see as the privilege of a safe abortion’

That provided the spark for 30 years of campaigning. I went to the next ALRA annual general meeting, and that was when I met Madeleine Simms. Before I knew where I was. I was on the ALRA committee, never having sat on a committee for anything in my life. But I became determined to go out and talk about it. I went to public speaking classes and took all my medals. I think I was probably the first person that said in public, on television and the radio, that I had an abortion. It was a word that you could not say, it was never mentioned. It is impossible to imagine those days.

We will be sharing more pieces from the bpas archive - for regular updates, search #bpasarchive 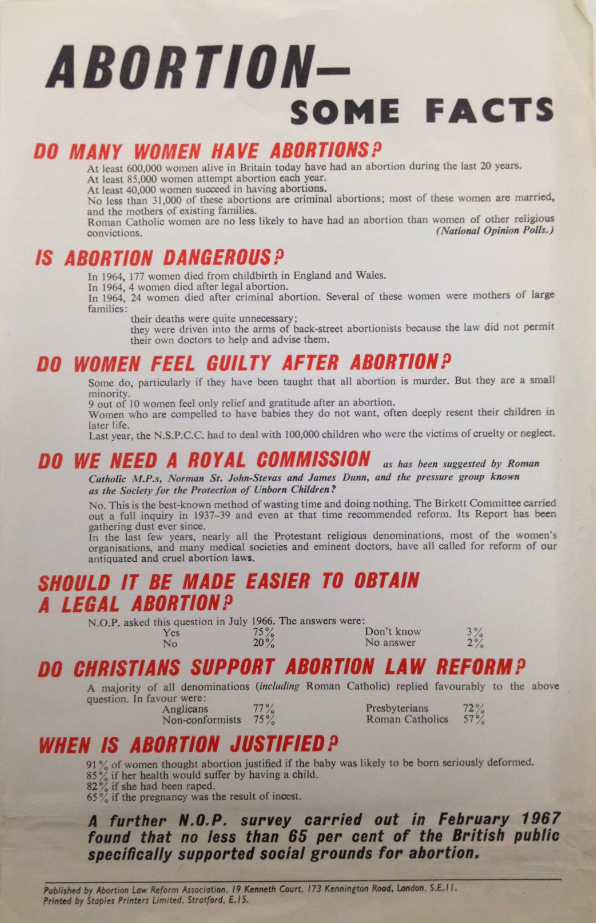