Seasonal safe sex messages tend to involve raucous parties and office stationery cupboards. The reality is (unfortunately) often rather more mundane - less fumble on a photocopier, more forgetting to pick up the pill. 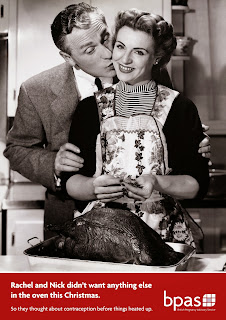 Unplanned festive conceptions can become much wanted pregnancies, and in fact autumn last year was the busiest period in for births. But for many women, starting the New Year with an unplanned pregnancy can be a cause for considerable distress – and older women are no exception to this.

In January and February this year we saw nearly 4,000 women over 30 for advice about unintended pregnancy, including an average of 13 women over 40 each working day.

More than 80% of the over-30s we see are already mothers. Many tell us that sorting out their contraceptive needs has come low down on the to-do list as they prepare for a family Christmas.

Emergency contraception, already harder to access free of charge for older women, may be even more difficult to obtain in this period. At the same time, persistent messages about infertility in your 30s or 40s lead some women to believe they can take chances after an episode of unprotected sex. While fertility does decline after the age of 35, in our experience women can vastly overestimate how hard it is to become pregnant in your late 30s and early 40s.

Unplanned pregnancy isn't just an issue for young women. It can affect any sexually active woman at any stage of her reproductive lifetime, at any time of the year. We want women to be prepared with their contraception this Christmas - and avoid unwanted surprises in the new year.
Posted by bpas blog at 00:30