Earlier this morning on his LBC show, Nick Clegg, perhaps fired up from his head-to-head with Nigel Farage last night, launched a passionate attack on those who oppose making access to the morning-after pill easier for young women.


Yesterday, National Institute for Health and Care Excellence (Nice) produced new guidance stating that young women should be allowed to keep emergency contraception at home, so they have immediate access to it if they need it. Nice also called for the morning-after pill to be available free of charge to all women under 25.


Yet there has been the inevitable outcry from certain politicians and journalists – a reaction which Clegg described as being based on out-dated "medieval" attitudes towards women.


The Deputy Prime Minister said "I am absolutely appalled and really very angry on behalf of many, many women across the country about the suggestion that giving a woman the right to buy a morning-after pill will somehow automatically lead to more promiscuous behaviour.


"Women don't take a morning-after pill lightly. It is not something you casually do. To say to a woman she can't have the right, in case she has unprotected sex, to have a morning-after pill available because we - the Government, society or whichever newspaper columnist is pontificating about this - think she will suddenly become terribly promiscuous, I think is an absolute insult to women across the country.


"I believe the experts, who have quite clearly said that providing the morning-after pill and other forms of contraception - the evidence is very clear - doesn't lead to more promiscuous behaviour. It does help prevent unwanted pregnancies.


"This is lifting the lid on a really fundamental difference in attitudes towards women. Women shouldn't be told 'We are not going to give you the freedom to buy something from a chemist because we don't trust how you will behave sexually'. It's a Victorian - worse than that, medieval - approach to women."
Nick Clegg said that doctors should encourage girls under 16 who are considering contrac eption to talk to their parents, but that : "At the end of the day, when you are faced with the reality of a teenager who is in trouble, you as a medical expert want to help them, and I think for us to decree that they can or can't help someone isn't going to alter the fact that that 16-year-old is in trouble.


"The way to deal with that is to make sure we go with the evidence that if you provide people with education and information and make contraception available on a responsible basis, that is the way we stop unwanted pregnancies, not by resorting to really out-dated attitudes towards women."


We agree with Nick. 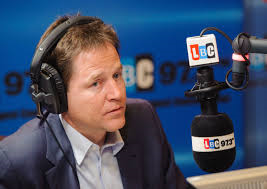