'Abortion is the one thing that unites us.' Stalemate in Northern Ireland since 1994

Last week, the High Court ruled that women from Northern Ireland are not entitled to free abortion care in England. The judgement put the spotlight back on the injustice that there are women living in the UK on 2014 who are not able to access abortion care when they need it.

Pro-choice campaigners have been arguing for decades that all women in the UK should be entitled to free, legal abortion when they need it. Seems rather basic, really. Yet any drive for progress is blocked by anti-choice politicians using the same tried, tested, and quite frankly tired, excuses for years. The parallels in this article we found in our archive from the Independent on Sunday on 13th November 1994, for example, are astonishing.

The article below, by Kenan Malik, looked at the ‘implacable opposition to abortion [that] crosses the divide in Northern Ireland.’ Change the date in the top right hand corner of this  and despite being 20 years old the entire article could quite easily be taken from a paper over the weekend. You wouldn’t even need to go to the hassle of getting some new quotes from politicians – the excuses and, to put it politely, misleading statements about the lack of support for abortion among the general population are still trotted out.

'Abortion as a unifying force in Irish politics' is sadly still very much a barrier to change. Steve Bell’s cartoon in the Guardian on Friday, below, was particularly on the money, and at a recent seminar the fact that abortion is one of the few issues both sides agree on was cited as a key factor in the continued stalemate. 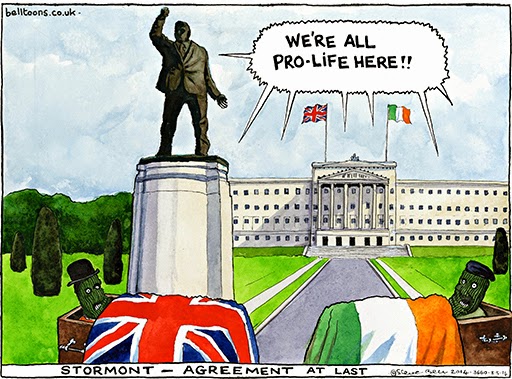 Inconveniently for anti-choice politicians, surveys and polls have been showing for years that a significant proportion of Northern Ireland just don’t agree with their views. Malik’s 1994 article looks at a survey conducted that year by Ulster Marketing Surveys for the Birth Control Trust which showed just that

Clearly politicians were out of step with public opinion in 1994 – and they still are today. FPA polling has shown that the majority support liberalising the abortion law, and this figure is still growing.  A Belfast Telegraph survey in 2012 also found that one in four in Northern Ireland support abortion on demand – a more liberal system than is currently in place in the rest of the UK. Despite these compelling statistics, politicians have continually ignored the mood for change. The then Secretary of State for Health, Virginia Bottomley, declared in 1994 that ‘there is no will in Northern Ireland for such change.’ In 2014 we have SDLP MLA Pat Ramsey taking over the reigns of blind denial stating that there is ‘no appetite for abortion.’

The experience of women facing unplanned pregnancies women of Northern Ireland in 1994 is also sadly similar to those facing unplanned pregnancies today. The personal stories in this piece of women feeling too ashamed to tell anyone about their pregnancy, of feeling isolation, and of struggling to meet the huge financial burden sadly echo those of the women of Northern Ireland today.

You get a sense of Groundhog Day when reading this article. Women in Northern Ireland are having abortions and they are paying a huge emotional and financial cost. This cost has been imposed by their own politicians, united in their ability to ignore both women’s experiences and the support for change.

We were all very disappointed with last week’s ruling that women from Northern Ireland aren’t able to access free abortions on the NHS in England. But let's hope in another 20 years time these women will not only be able to access free NHS care, but most importantly able to do that at home. 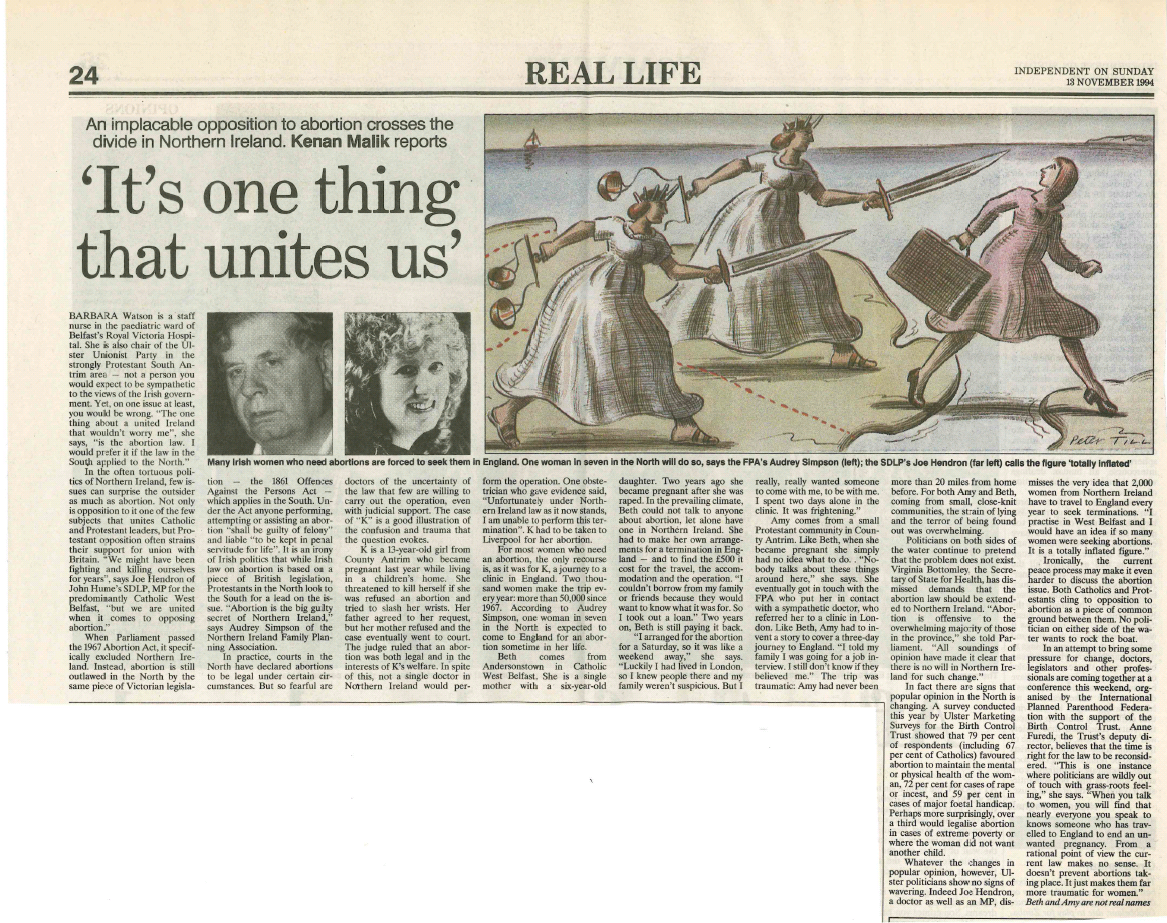