A 'United' Kingdom? Disparity in abortion legislation between Great Britain and Northern Ireland

Last week, we attended a seminar by Jennifer Thomson, a PhD student at Queen Mary’s University London, looking at the continued disparity between abortion legislation in Great Britain and Northern Ireland. It was mainly students in attendance and we thought, ‘why should they hog all the learning fun?’, so decided to write this short post. 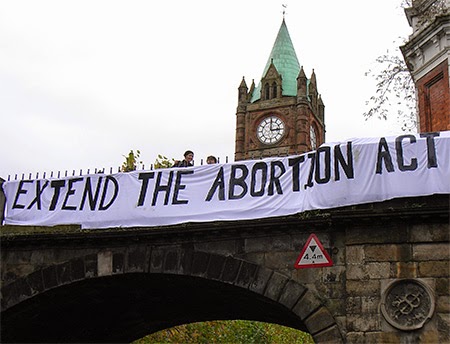 The 1967 Abortion Act, which legalised abortion in England, Scotland and Wales, was never extended to Northern Ireland. In 2008, Diane Abbott MP’s amendment to the Human Fertilisation and Embryology Bill presented an opportunity to do just that, but it was sadly unsuccessful. A transfer of justice powers to Stormont in 2010 means that this was probably the last chance for Westminster to effect such a change in Northern Ireland. The power to end the inequality now firmly resides with Northern Irish politicians.


Social attitudes are now out of step with the law, with a recent poll by the Belfast Telegraph finding that 46% support liberalisation. Thomson pointed out that the majority of polling suggests a greater acceptance for abortion on medical rather than social grounds: the Northern Ireland Life and Times survey found that only 25% thought that abortion was wrong in cases where there was a strong chance of “a serious defect in the baby” whereas a greater proportion, although still the minority, thought abortion on the grounds of a family’s financial difficulties was always wrong (43%). Currently, the government is only considering legislation for abortion in cases of fatal foetal abnormality which, while incredibly important, would only help a very small handful of women.


Why has there been so little movement on abortion rights in Northern Ireland? Thomson suggested that the continuing power of religious authority, much greater than that in the other nations, plays a crucial role, with abortion one of the few issues that bridges the strong religious divide. Thomson also argued that the idea of equality is largely seen in the context of creating parity between the two communities, rather than between men and women. Abortion rights campaigners are not alone in facing these difficulties and Thomson pointed to similarities with the LGBT rights movement. Northern Ireland refused to follow suit when the rest of the UK legalised same sex marriage and adoption, with the Northern Irish Attorney General stating at the time: "what happens in Scotland, England and Wales does not constitute a line into which Northern Ireland must be brought”, a phrase which could easily have been said in the context of a debate on abortion.


So after it was thoroughly - and depressingly - established that politicians are content to keep their heads firmly stuck in the sand, the discussion moved on to what pro-choice campaigners can do to help bring about the change Irish women so desperately need.


The government’s decision to act on abortion for fatal foetal anomaly only occurred because brave women were able to tell their stories, leading to a public outcry that couldn’t be ignored. But, as Thomson pointed out, it is very difficult to create a similar wave of public sympathy when a culture of silence and stigma still presides, in particular around terminations for social reasons.


Luckily, we were joined by Speaking of I.M.E.L.D.A., a group challenging the ongoing problem of Ireland making England the legal destination for abortion (hence the name.) One campaigner said it is very hard to get the public to support a cause that is barely spoken about, but there is a growing pro-choice movement working to raise the awareness that is needed for change.


It is unjust that women in Northern Ireland are denied the rights offered to women in other nations in the UK. Campaigners have been working to end this inequality for decades, and the polls are now showing that the public attitude to abortion is shifting. Try as they might (and they really are trying very hard), politicians can’t continue to ignore this issue, and they can’t continue to ignore the needs of the women of Northern Ireland. As one activist said as the event was closing, “we’ve have been campaigning for 20 years – and this time we’re not shutting up.”

Photo via Alliance for Choice
Posted by bpas blog at 07:06