In the third post from the bpas archive we are sharing extracts from a publication called ‘Abortion: Ten Years On’. The Abortion Act received Royal Assent on 27th October 1967, and six months later on 27th April 1968 it came into force. This booklet was published by the Birth Control Trust in 1978 and features articles written by those closely involved in campaign for legal abortion in England, Scotland and Wales.

The first piece is from Alastair Service, the chairman of the Family Planning Association, and paints a fascinating picture of his time as a lobby organiser for the Abortion Law Reform Association  while the 1967 Abortion Act passed through Parliament.


He takes us through the initial repetitious days he spent scurrying across the Central Lobby approaching MP’s – some of them were “fiercely bearded”, a wonderful description I hope to hear more often. There were also mass lobbies, but unfortunately MPs didn’t really turn up. So they went to the Bar where funnily enough they found a large number of MPs to lobby. There were some barriers to cross: one MP told Service “send me all your stuff and I’ll talk it over with my wife”, while another declared “I don’t vote on things like that – I concentrate on the major issues”, presumably referencing the  Domestic and Appellate Proceedings (Restricting of Publicity Bill) which was competing for members attention at the time. Crucial stuff….


Service and his fellow campaigners ploughed on, rounding up MPs, nagging them during the late night sittings until they promised to stay to vote. Eventually while Service and Houghton were in a café and chatting about a campaign for free contraception, the final stage passed. The lesson: a watched Parliament never votes. Best to go and have a cup of tea.

One MP who Service definitely didn’t need to nag in the late hours of the evening to back the Bill was it’s architect David Steel. He is naturally pleased to celebrate the ten year anniversary of the abortion law reform in 1978. A parliamentary inquiry in to the Act found that it was responsible for “relieving a vast amount of individual suffering.” He took on those who said he wanted to kill babies, that he was going to hell, that he didn’t care about families, and he won. And yet he still speaks of the “respect” he has for his opponents. It seems more than fair that the authors of this booklet decided that he should be depicted as a knight (albeit at first glance a little confusing.) 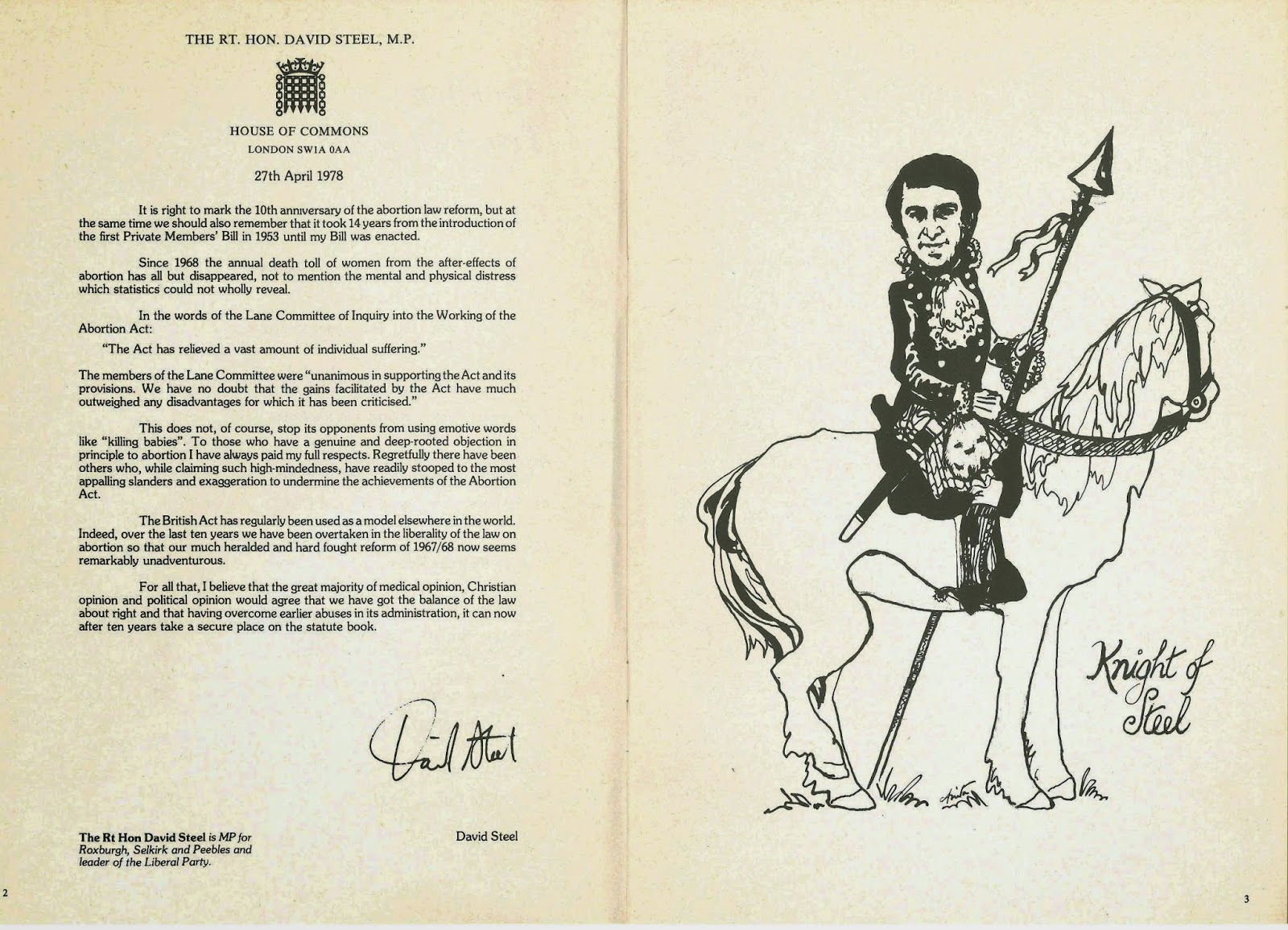 While, as Lena Jager MP notes in another chapter in the book, “nobody will ever be able to prove statistically the impact of the 1967 Act” that Steel fought for, Madeleine Simms, the former press officer at Abortion Law Reform Association, quotes from an inherited scrapbook full of late 1930’s news clippings that prove in a much more powerful way than numbers ever could what the Abortion Law has meant for women.


These articles document the tragic conditions under which illegal abortion took place, and the risk women took with their lives and health when faced with an unwanted pregnancy. One case detailed is of a 36 year old woman who died from a “septic abortion followed by acute blood poisoning”, after deciding that 10 children in 17 years was enough. Even the Coroner expressed his sympathy, stating that he could “understand the desperate feeling that she must have had when she found herself once again pregnant.” 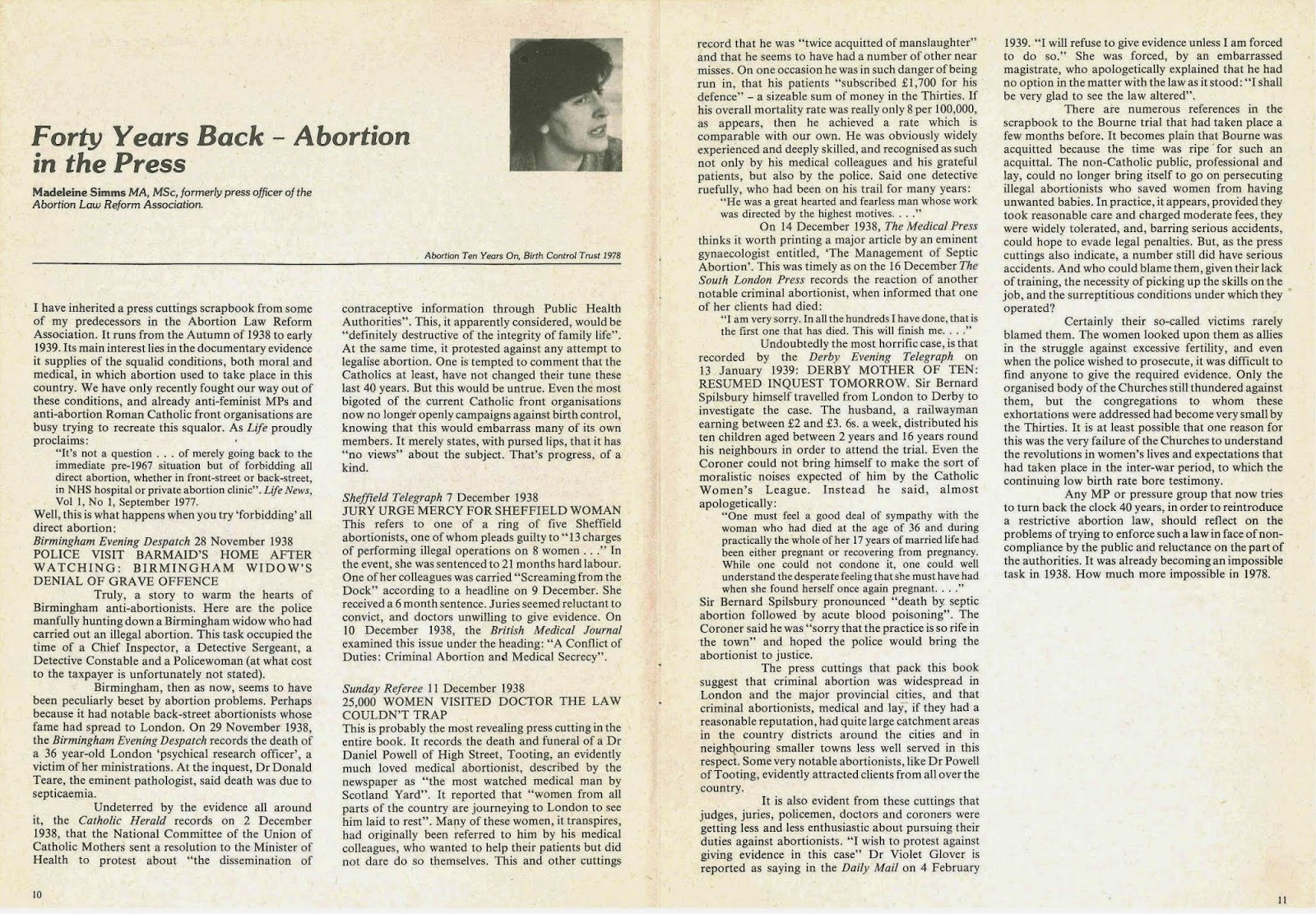 These also show how, despite the illegality, there was a community that worked together to provide abortions for these desperate women in a safer environment than those found down a back-alley. These “medical men” were breaking the law, but they were valued and supported, with defence funds raised when they faced prosecution. And when Dr Daniel Powell of Tooting , “the most watched medical man by Scotland Yard” died, “women from all parts of the country journeyed to London” to pay their respects.


Simms wrote that the scrapbook demonstrated the importance of free, legal abortion to those who in the late 1970s wanted the return of a restrictive abortion law, but the picture they paint serves as just a useful a reminder of life without legal abortion today.

For further updates from the bpas archive follow us on Twitter or search the hashtag #bpasarchive
Posted by bpas blog at 02:20